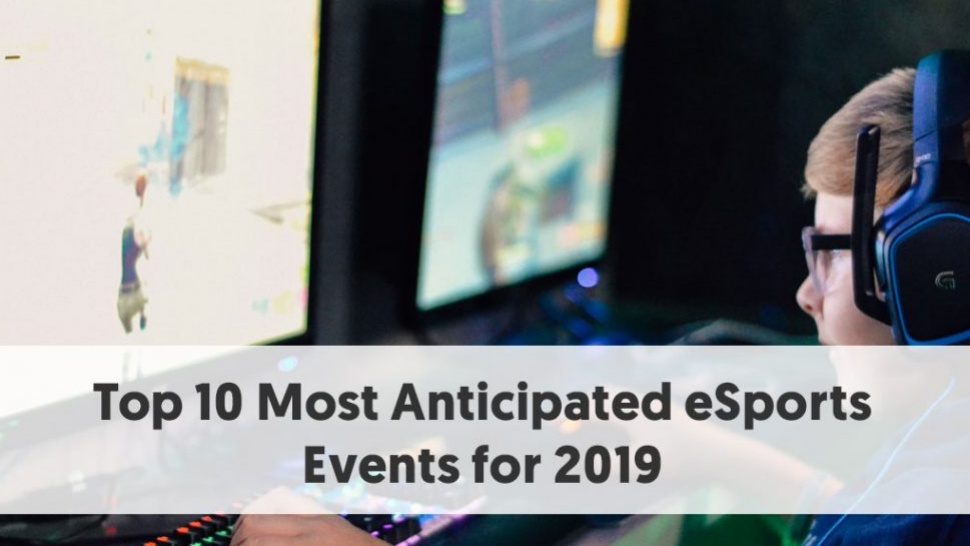 Top 10 Most Anticipated eSports Events for 2019

The most anticipated eSports event for 2019 is the Fortnite World Cup with a prize pool of $100 million. This is the largest amount of prize money for any eSports event in 2019. The tournament will be organised by the game’s developer, Epic Games.

While the World Cup is scheduled to happen in 2019, the qualifiers started in the Fall of 2018.

Unlike other tournaments, Epic Games has announced that for this event they will not sell any franchises and teams and event participation will be entirely merit-based.

Even before the actual tournament happens, the developers have made some mistakes that caused dissatisfaction among Fortnite’s professional players.

They organised a qualifying round on one of the most prominent American holidays—Thanksgiving. This caused a lot of backlash from the players. During the qualifiers, they also added in-game items like the “Infinity Blade” weapon, which gave an unfair advantage to anyone who had it.

However, these things are not going to affect the popularity of the game, which saw unprecedented success in 2018. Also, despite these incidents, the tournament still remains the most-anticipated event because of the enormous prize.

This is the biggest tournament for League of Legends players worldwide and is organised by Riot Games. League of Legends has become a popular game, especially with so many professional players streaming their live performances on Twitch. This has driven the popularity of the game and made it a global success.

The qualifying rounds for the tournament started February 3, 2019. The dates for the final world championship has not yet been announced. But usually, it happens later in a year, around October or November.

The League of Legends World Championship was one of the biggest eSports events of 2018. Even with Fortnite stealing the show this year, the popularity of this event is not likely to diminish. In 2018, the prize money was $2.25 million, but the prize for 2019 championship has not been announced.

The venue for the 2019 League of Legends World Championship has been announced, and it is Paris, France.

This is the annual world tournament for DOTA 2 players and is one of the biggest eSports events scheduled in 2019. That is primarily because of the popularity of DOTA 2 in the gaming community, worldwide. It is one of the most popular games in the world and has an enormous player base.

The event is organised by the game’s developer, Valve Corporation.

The tournament will be held in the Mercedes Benz Arena in Shanghai, but the dates have not been announced yet. The tournament usually happens later in a year, around August.

Call of Duty World League is an annual tournament held to decide the world champions for the game. The tournament is organised by Activision Publishing, the game’s developer.

The qualifiers for CWL were held in January 2019 and the season will start sometime later this year. There will be 16 teams competing for a prize of $6 million. This is the largest prize for any Call of Duty tournament ever.

This year, the game will be played in a five-versus-five format. All regional restrictions have been removed to allow players from all over the world to easily compete in the tournaments. The players will participate in the games via PlayStation 4, as they have an official collaboration with the organisers.

The prize money for the 2019 event is $1 million. Although this might seem low compared to some of the other tournaments on our list, it is still a huge prize for a gaming tournament.

And Counter-Strike is still an extremely popular game, even though it’s been around for years. Thus this tournament is a must-have on our list of most-anticipated eSports events for 2019.

Overwatch has emerged as a mainstream game played by several professional players worldwide.

The Overwatch League is the biggest Overwatch tournament in the world, where 20 teams (permanent franchisees) compete to be the world champion. These eSports teams represent different cities around the world.

The Overwatch League is organised by Blizzard Entertainment, the company that developed the Overwatch game.

This year, the tournament season will start on February 14th and will continue till August 25th. The tournament is conducted in 4 stages, each goes on for five weeks. The prize for this year’s tournament is $5 million.

This is a Halo 5: Guardians tournament organised by Microsoft and 383 Industries.

In 2018, the event happened in April, with a total prize of $1 million. The dates for the 2019 tournament have not been announced yet.

The qualifiers round is the first filtration round after which 16 teams are invited for the championship. Then the tournament begins with a group play format with four groups of four teams each.

This is the biggest eSports event for PUBG players worldwide, which is organised by PUBG Corp.

The event will have 9 pro teams that will represent 9 different regions. The tournament will start with regional competitions first, which will determine the 9 teams that will compete for the world championship.

The prize for the world championship will be at least $2 million. The matches will go on throughout the year, and the final event is scheduled for November 2019.

More details on the rules and game formats will be released later this year.

This is a new series started by Fortnite developers, Epic Games, and it is the second Fortnite event on our list. The idea is to host short-duration events in between the larger tournaments like the Fortnite World Cup.

Even though it is just a two-day event, it has a massive prize pool of $500,000. This makes it eligible for our list of most-anticipated eSports events.

The event will have top Fortnite players from each open Fortnite tournament of the season. The event will be held on the 14th and 15th of February 2019.

The DOTA 2 Asia Championships, popularly known as DAC, is the second DOTA event on this list. Despite being a regional event, DAC had a prize of $1 million in 2018. It was held in March and April 2018 in Shanghai, China.

Though the dates for 2019 tournament have not been announced yet, it will most likely happen around the same time this year.

The season will begin with regional qualifiers. Then there will be a group stage during which a few more teams will be eliminated. Then the final teams will reach the main event. The final matches will work on a best-of-three format with double eliminations.