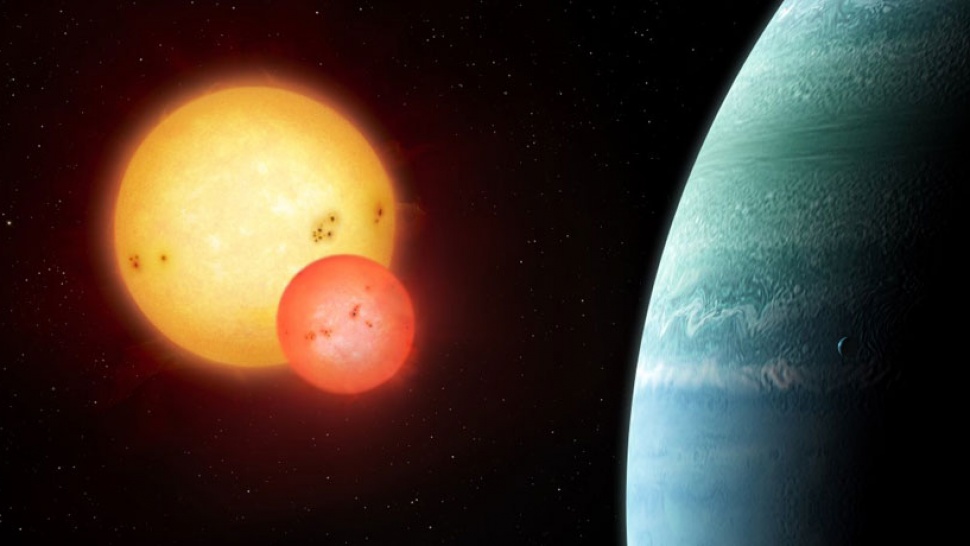 A teen scientist from New York has discovered several distant exoplanets, including a world that orbits two suns.

PHOENIX, Ariz. — Sometimes science fiction becomes science fact. For instance: In the Star Wars saga, Luke Skywalker grew up on a world that circled two suns. Now, a teen in New York City has discovered just such a world orbiting a pair of stars far, far away.

Brian Wu, 17, presented his findings here this week at the Intel International Science and Engineering Fair. ISEF was created by Society for Science & the Public in 1950. Its 2019 event, sponsored by Intel, brought together more than 1,800 finalists from 80 countries. (The Society also publishes Science News for Students.)

Storytellers have long imagined worlds that might orbit distant stars, or exoplanets. A little more than 30 years ago, astronomers finally discovered one. Since then, they’ve turned up thousands more. These distant worlds come in many different sizes and some are nothing like any of the planets in our solar system. Now, an 11th-grade student at Horace Mann School in New York City adds a double handful of new objects to the growing tally.

Brian sorted through data collected between 2008 and 2012 by a ground-based telescope in New Mexico. This instrument looked at stars repeatedly during that time. Typically, the telescope returned to view each star once every two weeks or so. And each time, it took a detailed photo of the star in visible light. Embedded in the light spectra coming from the star are loads of dark features called absorption lines, Brian explains. Those narrow, dark lines are created when certain wavelengths of light from the star get absorbed by materials that lie between that star and Earth. Using those lines, scientists can identify what substances had absorbed the starlight. That’s because they know exactly where those lines should show up.

But sometimes those lines don’t appear exactly where they should, Brian says. Instead, they appear shifted. A shifting toward the red end of the spectrum, where the wavelengths are longer, means the star is moving away from Earth. When the star is moving toward Earth, those dark lines will be shifted toward the blue (shorter wavelength) end of the spectrum.

The more the lines have been shifted, the faster the star is moving relative to our planet. This motion-induced shifting of wavelengths is called the Doppler effect. It affects all wavelengths, including sound and microwaves. (This effect is also the foundation for Doppler radar, which shows the movement of wind-driven rain inside clouds.) By monitoring how the lines in a star’s spectrum have shifted over time, Brian was able to tell if a star was wobbling. If the star wobbled back and forth in a regular fashion — say once every 37 days, for example — that would point to the likely presence of a massive planet or other large body orbiting the star. (The tug of its gravity would induce that wobble.)

In his analysis, Brian focused on the 1,100 or so yellow stars in the photographic survey. Such stars are most similar to our sun. Among these distant stars, Brian found that nine were likely being orbited by giant planets less than 15 times the mass of Jupiter. Another star in the survey is likely circled by something called a brown dwarf. Such a body is typically between 15 and 75 times the mass of Jupiter — too small to become a star. Two of the stars were actually part of a two-star, or binary, system. Those pairs are so far from Earth but so close to each other that they appear to be a single star. Yet the regular changes in their spectra reveal that they’re a wobbling pair.

The most impressive of Brian’s new finds is a circumbinary (Ser-kum-BY-nair-ee) planet. That’s a term for a planet that orbits two stars — just like Tatooine, Luke Skywalker’s home world in Star Wars. Brian’s discovery emerged when he saw the small wobbles caused by the planet on top of the larger wobbles caused by the stars orbiting each other. Brian’s circumbinary planet is the first ever found using Doppler shifting, the teen notes. The other 23 that have been found were discovered by occultations. That’s when a planet passes in front of its parent star, causing a small eclipse — with a brief drop in light reaching Earth-based telescopes.

The circumbinary planet that Brian discovered lies between 400 and 500 light-years from Earth. It orbits its parent stars at a distance of about 90 million miles, his data suggest. It would circle them once every 315 days or so.

From the size of the wobbles of its parent stars, this newfound exoplanet is probably about 2.8 times as massive as Jupiter. That, in turn, likely means the planet is uninhabitable, he notes. But like the large planets in our solar system, the distant super-Jupiter probably has moons, Brian says. And since the planet orbits its parent stars at a distance where water might be liquid year round, those moons might be hospitable for life as we know it.