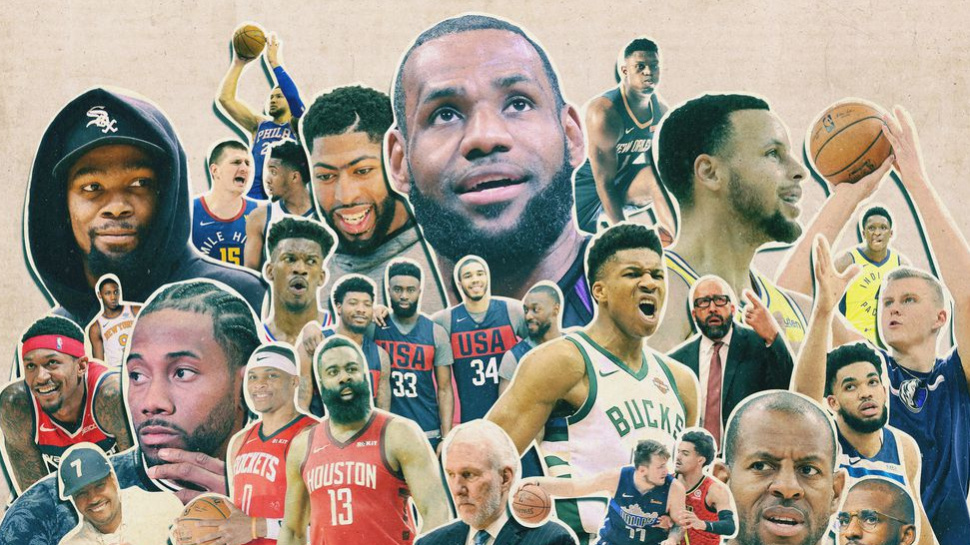 Is there a world in which LeBron James and Anthony Davis are the two best players in the league? What if Kristaps Porzingis is fully healed and suits up next to an even better version of Luka Doncic? Would it be that crazy if Klay Thompson returned and the Splash Brothers once again rolled as an unstoppable tag-team?

How exactly is one supposed to approach ranking the best players in the NBA? There is no truly objective method, as even statistical models have their own biases built in. (PER famously overrates bigs who rebound well, which is how Jonas Valanciunas finished 11th in that metric last season, slightly ahead of Stephen Curry.) Further, while I consider Rudy Gobert and Bradley Beal top-20 players, neither could even dream of playing the other's role. Team context matters, which is why it makes perfect sense that Rockets coach Mike D'Antoni doesn't want to trade P.J. Tucker for anybody, but Tucker would not be seen as untouchable if he played for the rebuilding Cavaliers.

Just because you can't perfectly measure something, however, does not mean that you should not try. The Top 100 list presented here, an amalgamation of individual lists submitted by CBS Sports' writing staff, is not flawless, and you will strongly disagree with some of the rankings, as I do. The point is to examine the ideas behind the disagreements.

If you are furious that Kyle Kuzma didn't make the cut, is it just because you're a Lakers fan or because you see something special in him? Maybe our staff collectively undervalues young players with star potential at the expense of role players who have proven that they contribute to winning. Maybe the panel is too high on versatile players who don't take anything off the table, unfairly punishing those who are more productive but have glaring weaknesses. Maybe there are cases where we have failed to properly appreciate a certain player's defense or basketball IQ or playoff performance. Making a Top 100 list forces you to think about all of this. Our hope is that reading it does, too.

A disclaimer: This is not about who had the best season last year or who is on track to have the most impressive career. Our panelists were instructed to focus on the 2019-20 season alone. As such, Kevin Durant is not ranked. Neither are John Wall or Jusuf Nurkic. Klay Thompson is on the list, and if you think he's too low, it's because there is uncertainty about his return from a torn ACL. (If you think he's too high, it's because we are collectively optimistic that he will be back and be productive before the end of the regular season.) Now, to the rankings!

What will Kawhi Leonard do for an encore?

Leonard is coming off of the best season of his career. While he missed more than a quarter of the regular season, mostly due to load management, he had a historic postseason that culminated in the Toronto Raptors winning their first-ever championship.

Leonard has since seen his stock go through the roof, with our NBA.com Staff ranking him as the best player in the league entering the 2019-20 season.

With that comes high expectations. Not only are the Clippers expected to finish with the best record in the Western Conference next season, they enter the season with the second-best odds to win the title.

For the Clippers to live up to that hype and potentially win their first championship in franchise history, they'll need Leonard to be every bit as good as he was last season.

There's some history on the line for Leonard as well. If he adds another Finals MVP to his trophy case, he'll become the first player in NBA history to win the award on three different teams.

When will Paul George return?

And more importantly, what will Paul George look like when he does?

Like Leonard, George is coming off of the best season of his career. In averaging 28.0 points per game and leading the league with 2.2 steals per game, he received the third-most votes for both MVP and Defensive Player of the Year.

George didn't finish the season on a particularly strong note, though. Due in large part to a shoulder injury, he saw his production decline in the final 18 games of the regular season. He then struggled with consistency in Oklahoma City's first-round series with the Portland Trail Blazers in the playoffs, combining for 19-for-61 shooting (31.1 percent) in three of the five games.

George has since undergone surgery on both of his shoulders and is expected to miss the start of the season, eyeing a "November-ish" return.

Having parted ways with Shai Gilgeous-Alexander, Danilo Gallinari and a boatload of draft picks to acquire him, the Clippers are betting big on George being more like the player he was in the first half of last season when he does return. If he can, the Clippers could very well have the best duo in the league in George and Leonard. They might even have the league's best defensive duo since Michael Jordan and Scottie Pippen.

If there's one position the Clippers are lacking depth heading into the season, it's centre.

They have two viable options in Ivica Zubac and Montrezl Harrell, but it remains to be seen if they can handle their own against the league's best centres. Zubac played well after the Clippers acquired him last season, but he's both young and inexperienced. Harrell, meanwhile, was a finalist for Sixth Man of the Year last season but he's undersized at 6-foot-8, making it tough to matchup with the likes of Joel Embiid, Nikola Jokic and Anthony Davis - three players the Clippers could very well face in the playoffs.

The Clippers appeared to have Joakim Noah in mind for their final roster spot, but Sean Deveney of Heavy reported that his workout with the team ahead of the season was postponed. If Noah doesn't end up being the answer, their best options on the free agent market are Amir Johnson, Marcin Gortat and Salah Mejri.

The Clippers could otherwise look to make a trade at some point of the season or wait to see if anyone gets bought out. They'd certainly be able to make a compelling case to any free agent, offering both minutes and an opportunity to compete for a title.

George isn't expected to play as he continues to recover from offseason surgery, but anytime Leonard and LeBron James face-off makes for must-see TV. Adding to the intrigue: Anthony Davis will make his regular season debut with the Lakers.

Leonard and Giannis Antetokounmpo went to battle in last season's Eastern Conference Finals, with Leonard getting the better of the reigning MVP. Being the competitor he is, you best believe Antetokounmpo has this game circled on his calendar.

Leonard returns to Toronto for the first time since leaving the Raptors in free agency. Leonard's time with the franchise was short but won't ever be forgotten. He averaged a career-high 26.6 points per game during the regular season and led the franchise to its first-ever championship, winning his second career Finals MVP award along the way.

The second of four meetings between the Clippers and Lakers this season. George should be good to go in this one, making for a star-studded Christmas Day matchup.

Leonard will return to Golden State for the first time since The Finals earlier in the season, but there's a chance Klay Thompson could suit up for the Warriors in this one - the latest report is that he'll be out until at least the All-Star break, which will take place in mid-February. If he does, a late-season showdown with the Clippers will be a good litmus test for the new-look Warriors.

The views expressed here do not represent those of the NBA or its clubs.