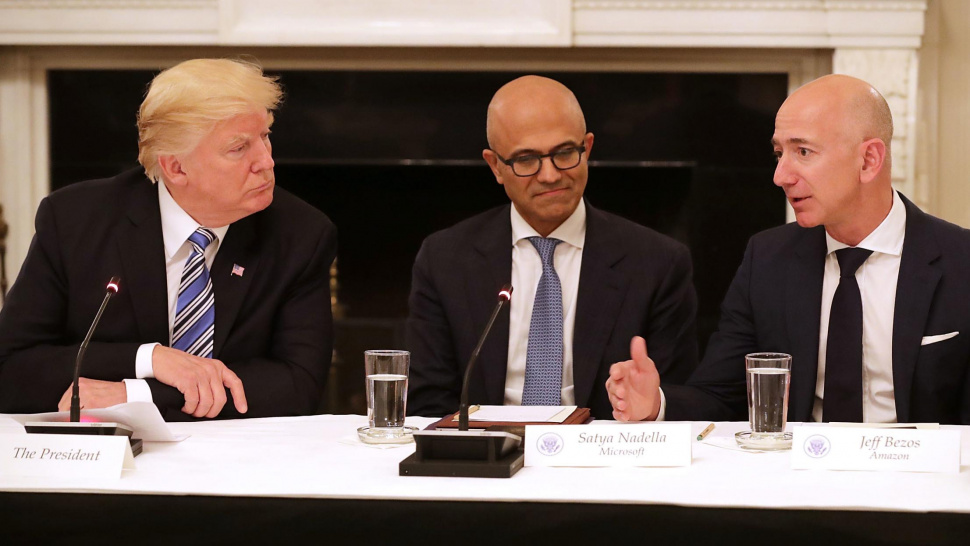 Amazon said Thursday that it will protest a Pentagon decision to award Microsoft a massive cloud-computing contract worth up to $10 billion, making clear it will fight hard against what it called “unmistakable bias” and “political influence” in the Defense Department process.

The protest, filed under seal in federal court on Nov. 8, comes after the Pentagon awarded the Joint Enterprise Defense Infrastructure (JEDI) contract to Microsoft last month — a contract that had long been expected to go to Amazon because its Amazon Web Services (AWS) division has a formidable position and deep experience in cloud computing.

The Pentagon’s decision, a bitter defeat for Amazon, had been delayed after President Trump ordered Defense Secretary Mark T. Esper to review the contract after he was confirmed in July. Trump has repeatedly criticized Amazon, whose chief executive, Jeff Bezos, owns The Washington Post.

In awarding the contract to Microsoft, the Pentagon said it was making its decision on merits and without regard to political considerations. But in its statement Thursday, Amazon suggested that it believed the Pentagon was improperly influenced by Trump. Federal acquisition laws prohibit politicians, including the president, from influencing contract awards.

“AWS is uniquely experienced and qualified to provide the critical technology the U.S. military needs, and remains committed to supporting the DoD’s modernization efforts,” Amazon spokesman Drew Herdener said in an emailed statement. “We also believe it’s critical for our country that the government and its elected leaders administer procurements objectively and in a manner that is free from political influence. Numerous aspects of the JEDI evaluation process contained clear deficiencies, errors, and unmistakable bias- and it’s important that these matters be examined and rectified.”

The charged language in Amazon’s response was striking because the tech giant has generally avoided conflict with Trump. But the protest suggests that Amazon wants a court to review the role of politics in the Pentagon’s decision-making and scrutinize Esper and Trump’s input in the process.

The loss of the JEDI contract was a significant financial disappointment for Amazon, but it also came after the company committed to hiring 25,000 people over 10 years in the Washington area, a significant East Coast expansion that was focused in part on government business.

In an emailed response to Amazon’s statement, Defense Department spokeswoman Elissa Smith said, “We will not speculate on potential litigation.” Microsoft did not provide comment.

Amazon is the commercial cloud-computing market leader, holding a 48 percent market share, according to market-research firm Gartner. Microsoft is the second largest, with a 15.5 percent share.

Amazon is also the only company to hold the Defense Department’s highest-level security certification, called Impact Level 6. Microsoft made strides during the year-long period the award was tied up in litigation, finalizing a number of partnerships that analysts say may have narrowed the gap. Microsoft says it has made enormous progress on Level 6 certification and will be ready by the time JEDI is implemented.

Amazon filed its notice to protest under seal with the U.S. Court of Federal Claims. The company will still need to file a formal protest, laying out its arguments in detail.

The JEDI contract, announced in March 2018, is designed to modernize the Pentagon’s computing infrastructure in the hands of a commercial tech company. For more than a year, the Pentagon faced harsh criticism that the procurement was written with Amazon in mind.

Dana Deasy, the Defense Department chief information officer overseeing the source selection team, has argued that the JEDI procurement followed a two-track process in which Esper’s review of the procurement’s broader approach is completely separate from those who reviewed the bidders’ applications. Deasy said in a recent congressional hearing that the members of the source selection team remained anonymous throughout the process and, to his knowledge, were never contacted by the president.

Steven Schooner, a procurement lawyer with George Washington University, called Deasy’s testimony on that issue “fundamentally flawed,” noting that another senior official makes the decision on whom to award the contract. This official’s identity has remained anonymous.

For Amazon, losing out to Microsoft wasn’t just surprising, it was stinging.

At an all-hands meeting Thursday, Amazon Web Services chief executive Andy Jassy suggested to employees that Trump’s interference scuttled the bid, according to a report from Federal Times, which viewed a video of the session.

“I think when you have a sitting president who’s willing to publicly show his disdain for a company and the leader of a company, it’s very difficult for government agencies including the DoD to make an objective decision without fear of reprisal,” Jassy said, according to the Federal Times report.